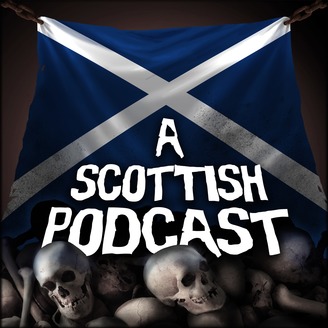 A Scottish Podcast is a comedy-horror (note the order) audio drama that tells the story of a disgraced radio presenter who starts a paranormal podcast with intentions of capitalizing on an inherently gullible audience, only to accidentally stumble across legitimate paranormal phenomenon.

After crapping his pants on a nationally broadcast live chat show years prior, washed-up radio DJ Lee powers is looking to regain some popularity and make money along the way. In a particularly meta plot point, real-world podcast The Black Tapes inspires him to start a “real” horror documentary podcast: The Terror Files (a title that gets extra points when said with a Scottish accent). With reluctant, snarky production assistant Doug, Lee lucks upon a spooky situation that launches the podcast to instant stardom.

What follows is an eighteen episode first season with lots of comedy, character development, and a splash of occasional horror content. One of the biggest running themes of the series is lulling the audience into a false sense of security with some genuinely hilarious sitcom-styled character interactions only to flex its horror muscles.

Without spoiling anything, there are at most four or five genuinely “horror” moments, stemming from the season’s two “antagonist” baddies of a mysterious ancient demon warlord and, basically, Cthulhu. In between is a series of interactions with a podcast-obsessed mobster, local council intrigue, and random encounters with an obscenely drunk character.

Sometimes the series takes tongue-in-cheek humor so far said cheek looks like John Hurt’s stomach in Alien. In one scene mobster Bruce explains why he likes The Terror Files by comparing it to real-world podcast The Black Tapes, which Lee immediately sources as an inspiration for his show. In a filler episode Dougie reads 1 star iTunes reviews of the show while Lee makes smartass quips back at the reviewers.

In the end there are only two real points of criticism I have to level at A Scottish Podcast:

The finale clocks in at three times the normal length of a regular 15 minute episode, and at multiple times it feel as if the 18 episode season was originally scripted to run 20 episodes and the final few were combined to make a more finale-y finale. While this isn’t inherently a bad thing, the more drawn-out feeling moments are amplified even further by the choice to put a hat on the fact that the episode is running long.

During one confrontation Lee interrupts a villain’s stereotypical “here’s my plan” monologue to ask if they’d prefer to simply give the monologue in one shot without pausing to wait for Lee to ask filler questions like “so then what happens next?” In an episode that goes beyond “big, exciting finale” into bloated self-aggrandizing levels, this bit of snark that directly hangs a hat on the idea of something being far too long is a bridge too far.

Secondly, and this will be something I bring up in AD reviews from here on out: as of this writing there are no transcripts available. While the show has been in hiatus (save for some mini-sodes) far longer than the recent push towards audio-drama offering transcripts as a standard, it would be nice to see this added to the website during a future update. In a medium necessitating a recording script anyway, the amount of time necessary to turn them into transcript is infinitesimally small compared to the accessibility it adds to a show.

Length and accessibility issues aside, A Scottish Podcast got more than its fair share of laughs out of me as I burned through the first season without coming up for air. This is the perfect podcast for those who want a show that chooses quality over quantity when it comes to the horror part of a comedy-horror series.

A Scottish Podcast can be found on iTunes or on its website.

View all posts by Gavin

1 thought on “Review | A Scottish Podcast: Season One”